February 14th-Hearts United,for One Billion Rising
A V-day Celebration at 730 Bellows Ave. Franklinton Downtown Columbus Ohio 43222
You will find OpenheartCreatures as dancing hearts and love birds to support this rising of our connected ONE heart.
Please join us at this event from 4-6pm

March 21 – Opennheartcreatures joined Honey For The Heart at The Creative Foundation in Marysville for a parade with the body puppets.

April 24-28 – OpenHeartCreatures travels to Toronto, Canada to join artist group Universe Universe with 30 body puppets to perform in a parade, Occupy Your Heart.

May 22 – OpenHeartCreatures featured in Bexley student documentary about creativity, exhibition at the Drexel Theater.

May 30 – OpenHeartCreatures participates in anti-bullying benefit Art + Drag for Michael at Circus.

June 27, 28, 29 – OpenheartCreatures performs at Columbus, Ohio’s very own Community Festival. Join Openheartcreatures for our 5th annual Live Arts Stage Performance Saturday 28th 2:20pm
Be on the lookout for other sightings of our large body puppets dancing and parading about throughout the festival weekend.

1-4pm ending with 3 parades throughout the galleries at The Columbus Museum of Art. Connector Series.

June 28, 29, 30th–COMFEST! ~ Columbus, Ohio’s very own Community Festival. Join Openheartcreatures for our 4th annual Live Arts Stage  Performance, and be on the lookout for other sightings as well….

This offering will focus on how good one feels after eating a ‘rainbow’ of fruits and vegetables. During the workshop, participants will create masks of different varieties of fruits and vegetables which will then be used in a performance demonstrating the colors of the rainbow based on the colors represented in those masks. The workshop and performance will build off the books “How Are You Peeling? Foods with Moods” by Saxton Freymann and Joost Elffers, and “The Way I Feel” by Janan Cain.  Improv storytelling will be used throughout the performance, incorporating the children’s responses about eating healthy foods that were prompted during the workshop.

Click on the link below to learn more about this AMAZING festival! 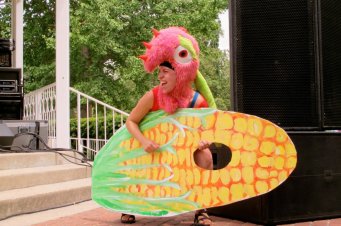 September 27~ “Bully Eraser ~ Love Replacer” performance joins Mifflin Middle School.
Three exciting  performances  for each grade  (6, 7, and 8th) Erasing Bully Behavior with hundreds of hearts. Our heart is what we all have. Our heart is our greatest instrument of change.
October 19  ~  “Stand Tall or Stand small”  a body puppet performance on stilts about standing up for yourself and holding confidence in your walk. Cincinnati Museum of Art
October 25 – Openheartcreature, Heidi Kambitsch will be working  with a team of puppeteers operating  two 15 ft giant skeleton puppets created by artist extraordinaire Bruce Hanner at hannersatelier.com
INTERACT with these puppets at HIGHBALL  Short North Columbus
October 25th and October 26th.
December 14 ~ Columbus Museum of ART’s ALL day open house for the brand new Family Wonder room.  50 handmade costumes created by Heidi Kambitsch will be on display for play. Come meet the artist, explore the new space and pretend. Prepare to open your imaginations and become a wicked wild creature !

February 25th-  A fun family, interactive afternoon at the Gateway Film center on High street, featuring music by The Shazzbots

February 25th – Heidi Kambitsch will be in body puppet

as a costume judge for this Mardi Gras Party! 8pm-midnight.

Experience how we learn through a Play Parade designed for ages 3 and up.

April 1~ APRIL FOOL’S!!! In spirit of such a festival holiday, Open Heart Creatures will be performing, and partying at the April “fools” party

May 12~ Agora 9 arts festival, where OHC will be creating an interactive body puppet with the community, as well as debut the latest addition to our family : A new art car!

May 18th ~  Open Heart Creatures set up an interactive photo booth at Indianola Alternative’s annual Carnival 5-8pm, and performing with “Captain Captain” from the Shazzbots!

June 15~ Open Heart Creatures will be at the Wall Street pride celebration. Where Heidi Kambistch will be debuting a new “Muppet Man” performance

June 16~  Open Heart Creatures will for the second year in a row, will be creating and performing at the “What You Will Festival”

June 23 ~  For another year, Open Heart Creatures will be performing at Columbus’ Comfest, at 1:50pm, on the Live Arts Stage. There we will incorporate Agrabatic yoga, in our “Creature Birth”.

July 4th ~  Open Heart Creatures will be teaming up with Portia, local raw food guru, and making a series of Veggie body puppets, to be debuted at the  29th annual Doo Dah parade

July 15th~  Open Heart Creatures will be playing, and dancing with “The Famous Johnson Brothers” as part as the Goodale Music Series

October 2012-Art Installation @ Brother’s Drake~ Heidi has transformed not only the doorway through the meadery, but wait until you see the bathroom!

November 18th-11am & 2pm Come see our performance “Walk Like yourself” on attitude with gratitude to begin to erase the bully. 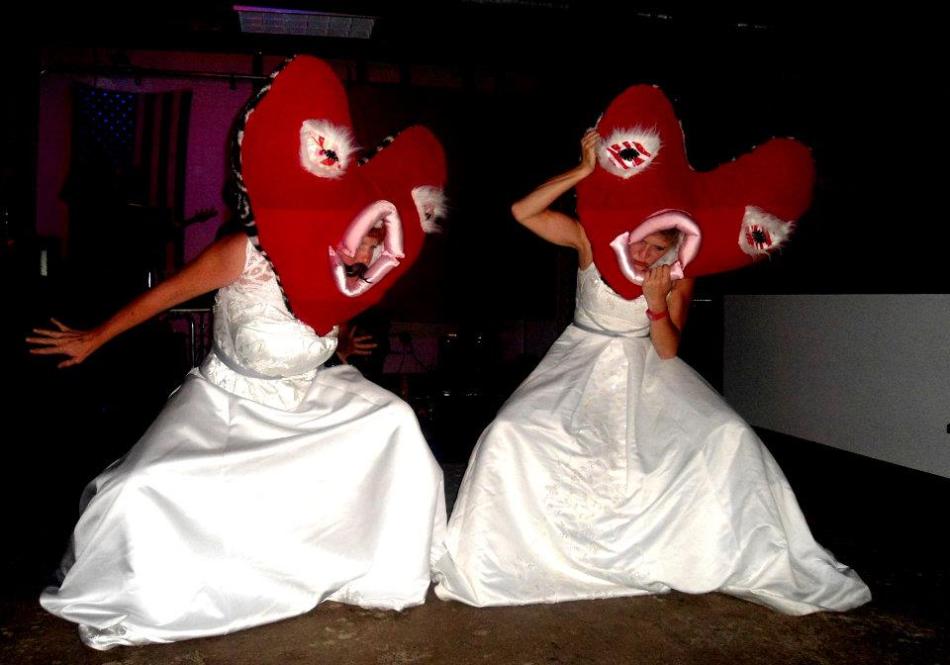 Dec 1 Openheartcreature will be greeting you at the door! Inspiration Manifestation~Expect something new made out of old. This be an inspiring event FUR sure:)